Recommendations from the Hand of the Cause Mr. Faizi for the Study of Baha'u'llah's Hidden Words

In 1974 the Hand of the Cause Abu'l-Qasim Faizi spent several days giving very precious talks in San Francisco. The photo is of a public talk he gave at the Miyako Hotel in that city during that same several-day visit. The woman on the far left, Marge Gallagher, was our Auxiliary Board member for Protection at that time; I don't remember the name of the lady on the right, she was also an Auxiliary Board member, and I don't know the woman in the center, probably a member of the SF Baha'i Community. The San Francisco Spiritual Assembly has a recording of that talk and perhaps of some of his deepenings given at the Center. Hopefully these will be available for distribution. Mr. Faizi spoke several times during that week in the San Francisco Baha'i Center, and every chance I got, I took off from the hospital where I worked in Grass Valley and came to his presentations. and in one of them he gave recommendations for studying the Hidden Words. I still have my notes on
1 comment
Read more

The Astonishing Meaning of the 'Hidden Treasure' Tradition The Remarkable Purposes for the Laws Revealed by the Bab

The Day of God Himself

Who Do Baha'is Believe Jesus Christ Is? 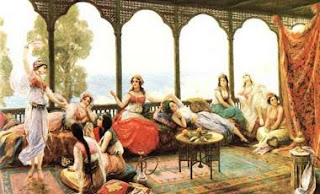 What is the Meaning of the 70 Virgins in Paradise?

Table of Contents of This Blog

Learn More About The Baha'i Faith

Other Sites by this Webservant